This group includes converts to Christianity from a Muslim background, as well as ethnic Armenian and Assyrian Christians who wish to worship in the national language (Persian), as many do not speak or understand any other language. Their right to freedom of religion or belief (FoRB) is being violated comprehensively, as they currently have no place where they can gather to worship.

The majority of Persian-speaking churches of all denominations have been forcibly closed in recent years, and only four small ones remain, which are kept under tight surveillance by the authorities. These churches are also not allowed to accept visitors or take on any new members.

The Iranian authorities do not permit converts to attend the churches of the Armenian and Assyrian communities, whose rights are recognised under the country’s Constitution. Moreover, these communities are themselves prohibited from holding services in Persian to further dissuade converts from attending. This means the only option available to a Persian-speaking Christian is to worship in private homes, in what have become widely known as “house-churches”. However, the Iranian regime views membership of a house-church as an “action against national security”, punishable by up to five years in prison. The establishment or directing of these house-churches - also considered a “national security” offence - carries a penalty of up to ten years’ imprisonment.

Thus, gathering peacefully in community with others to manifest one’s religious belief, as articulated in international human rights conventions, has been labelled a “security”-related offence, and Christians are increasingly arrested merely for gathering together for prayer or Bible studies. In November last year, senior UN figures including the special rapporteur on freedom of religion or belief, Ahmed Shaheed, and the special rapporteur on human rights in Iran, Javaid Rehman, wrote to Iran about the reported “persecution of members of the Christian minority in Iran, including converts from Islam, as well as the detention of dozens of Christians, most of whom have been convicted for exercising their right to freely observe and worship their religion”. That same month, the UN’s working group on arbitrary detention concluded that Iran was guilty of arbitrary detention in the case of Pastor Yousef Nadarkhani, a Christian convert serving a 10-year prison sentence - later reduced to six years - for leadership of a house-church.

All of this needs to change, now. And it’s up to each and every one of us.

Join the movement of people calling for change! Together, we can lead the way by doing something concrete right now – however small – whether it’s by adding your voice to a petition, taking action locally, or something unique to you: we’d love to stay in touch about what we can do together.

Because together, we are powerful.

Persian-speaking Christians are now wondering where they can freely gather to worship. Their appeal for freedom of worship, expression, association and the right to peaceful assembly also addresses a wider issue shared with other religious communities who are similarly experiencing violations of FoRB and associated rights and freedoms. Consequently, improvements in the human-rights situation for Persian-speaking Christians would also benefit other minority religious and ethnic communities including Baha’is, Jews, Mandaeans, Sufi Muslims such as Gonabadi Dervishes, Sunni Muslims, Yarsans, Zoroastrians, and the non-religious.

and ask “where can Persian-speaking Christians worship?”
GREAT THINGS HAPPEN WHEN PEOPLE GET TOGETHER 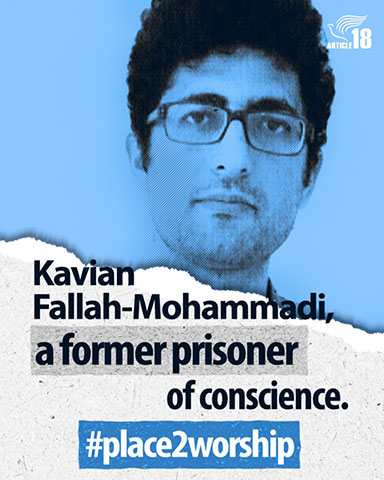 WHAT IS ARTICLE18 CALLING FOR?

The following is required of the Iranian authorities:

WHAT RIGHTS ARE CHRISTIANS BEING DENIED?

THE RIGHT TO FREEDOM OF THOUGHT, CONSCIENCE AND RELIGION

Iran is a signatory without reservation to the International Covenant on Civil and Political Rights (ICCPR), which in Article 18 provides for the right to worship and the right to adopt a religion or belief of choice. Persian-speaking Christians are being denied enjoyment of their very basic rights under the ICCPR. Iran’s own Constitution, per Article 13, considers “Zoroastrian, Jewish, and Christian Iranians,” regardless of their ethnicity, gender and language, as “recognised religious minorities, who, within the limits of the law, are free to perform their religious rites and ceremonies, and to act according to their own canon in matters of personal affairs and religious education.”

THE RIGHT TO FREEDOM OF EXPRESSION

In 2021 changes were made to Articles 499 and 500 of Iran’s Islamic Penal Code, which ARTICLE 19, an organisation dedicated to the protection of freedom of speech, called “a full-on attack on the right to freedom of religion and belief”. The amended version of Article 500 provides for up to five years’ imprisonment for “any deviant educational or proselytising activity” by members of so-called “sects” that “contradicts or interferes with the sacred law of Islam” through “mind-control methods and psychological indoctrination” or “making false claims or lying in religious and Islamic spheres, such as claiming divinity”. Ever since the amendments were proposed, rights groups including Article18 have warned that the vaguely defined law could be used to further clamp down on unrecognised religious minorities, including Persian-speaking Christians, as the two articles were already routinely used in the prosecution of converts. Just a few months after the ratification of the new amendment, three Christian converts were sentenced to five years each in prison under the new law.

THE RIGHT TO FREEDOM OF ASSOCIATION AND PEACEFUL ASSEMBLY

Freedom of peaceful assembly is the right of people to come together in a public place for a common expressive purpose, such as for worship, meetings, processions, and rallies. The right to peaceful assembly means that someone can gather together with others peacefully, without fear of being arrested or harassed by government agents. In fact, the authorities have a duty to facilitate peaceful assemblies, so the police may be required to take special measures to ensure the safety of both the people assembling and the general public. The right to freedom of assembly is enshrined in international human rights law, including the Universal Declaration of Human Rights (UDHR), and Article 22 of the ICCPR, as well as Article 26 of Iran’s own Constitution.

LATEST UPDATES ON THE CAMPAIGN

Article18 is your source for news on the persecution of Christians in Iran. We're constantly monitoring the situation on the ground and can offer interviews and provide further details on incidents reported on this website.